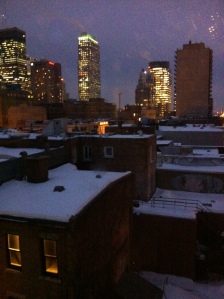 There were two ugly Christmas ornaments on my tree again this year. Every January I think of getting rid of them, but I never can. So I pack them away in boxes for next December and know that when I take them out I will think of the woman who sold them to me.

At that time we were living in a posh neighbourhood. This woman and her family didn’t “belong”. She and her three kids lived with her mother in a ramshackle place down the street. Their house always had something going on. No one seemed to have a job. Strange vehicles and hard-looking men came and went. The police made regular visits. The grandmother, a saint, did a lot. For long periods the woman would disappear. She had that gaunt, undone look of someone with addictions.

One snowy December afternoon our doorbell rang. I opened it. It was the neighbour.

At first I didn’t know what she wanted. Then she drew out of her coat pocket two boxes – large Christmas balls and small ones. She handed me one. She had hand painted crude designs of trees and snowflakes on dollar-store glass balls. Aren’t they beautiful?

I’m selling them to raise money for Christmas presents for my kids.

There really was no question. I bought two. And we hung them on the tree that Christmas.

That was many, many years ago. I’ve long since moved away. The three kids have grown up. Occasionally, I see one of the young men, who seems to be doing well. But their mother is gone. She died – they say of a drug overdose – a few years after selling me the decorations.

Maybe it’s just sentimentality that has me keeping these childish ornaments. But in the glitter and glitz that is Christmas, every year it seems a bit more important to pull them out of the box and think about them. And I remember a mother so desperate for money for presents that she went door to door, to her neighbours, without shame. And that reminds me of all the others for whom putting away ornaments is saying goodbye to a tough, tough season.