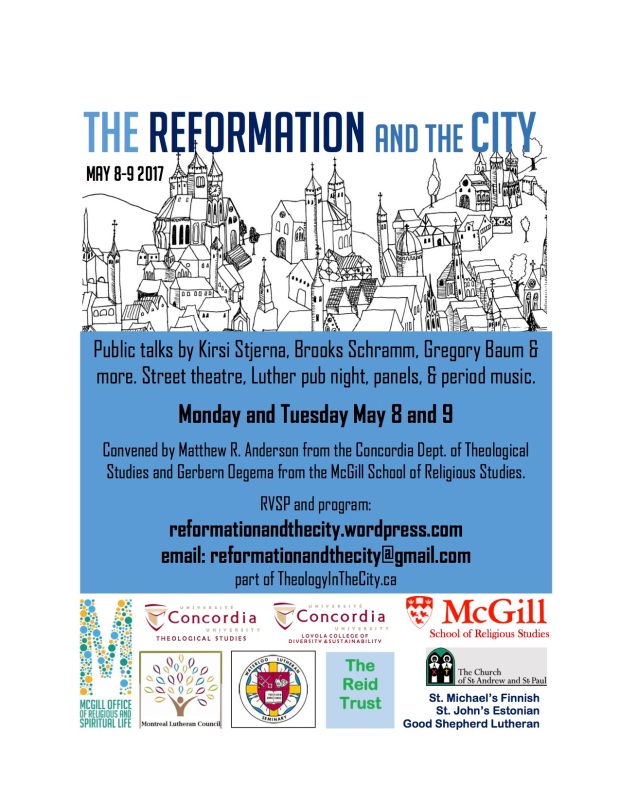 you can pre-register (and maybe win some swag) at:   Reformation and the City

Here are three examples I wrote for students. The assignment is to write a forgery, using a contemporary subject, of a fragment of a Gospel or of a scriptural apocalypse. The students are supposed to pay attention to the aims, the characteristic language, the themes and the style of the originals, and mimic those. These are my three!

A “Lord of the Rings/Hobbit” themed story, based on Luke 22:24 and following (a fragment from a Gospel)

A dispute arose among the travellers to Mordor about which of them was the greatest. The elves said: “We are immortal, and surely there is no greatness more desirable than this.” The dwarves said: “We are strong, and connected to the earth. Nothing is greater than the earth and its treasures.” The men and women kept silent, for they did not know what to say – they were weaker than the dwarves and short-lived: a man’s span is four-score and ten at most. But Gandalf called them together and said to them: “The lords of the Sauron lord it over their subjects. But it is not to be so among you. And then he took Frodo, the hobbit, by hand, and led him into the middle of the circle. “Rather,” Gandalf went on, “the greatest among you must become as the smallest, and the strongest as the weakest. It is the hobbit who is the greatest, for he will save us all.”

A Justin Trudeau political story based on Revelation 10: 1-10

And I saw a mighty lord coming down from the mountains of British Columbia, his smile like sunshine and a rainbow banner over his head; his face was that of an angel, and his body that of an athlete. He held a scroll in his right hand, and an eagle-feather from the First Nations in his hair, and when I inquired of my guide what the parchment might be, the guide said to me: “It is the last will and testament of his father, the Trudeau-who-was-before.” And setting his right foot on the sea of the Juan de Fuca strait, and his left foot on the land of Departure Bay, he gave a great shout, like the call of a grizzly bear. And as he shouted a sentence in both English and French, the three main political parties shuddered, and the fourth, a green beaver, hiccupped. And at the sound, I was about to write what I had heard, but the guide said to me: “Do not write what was just uttered. Rather, seal it up, and leave it for the second term.” And then the leader, who had a maple leaf across his chest and the words “Justin” over his forehead, held out his hand with the scroll upon it. And there was, I saw, also blood upon his head, and the guide said to me “That is the blood of the battles that are to come.” And then the guide said, “take the parchment from his hand.” And I did, and it looked handsome, but burnt my skin, like fire.

A personal family story based on Matthew 5, the beatitudes

When my grandmother saw the crowds of neighbours, she went up into the kitchen, and she sat down, and her daughters came to her. And she began to speak to them, and taught them, saying:

Blessed are you if you remember what you are worth, for no man will ever give you a value you do not give yourself.

Blessed are you when you suffer, as you will, for suffering builds character, and those whom adversity does not destroy, it strengthens

Blessed are you when you earn your own money. Keep some to the side, for the rainy days will come soon and often, and the dawning ease of childhood is short-lived

Blessed are you when you take up the cause of the poor and those with illnesses of the mind; there, but for the grace of God, go all of us.

Blessed are you when you put your hands into the soil, for you will be connected to what we are made of, and the matter to which we all return.

You are like a windmill on the farm. If no wind blows, the windmill cannot turn, and you cannot produce energy, or draw water. So always turn your face toward the winds of the spirit, and feel them in you, and you will be happy.