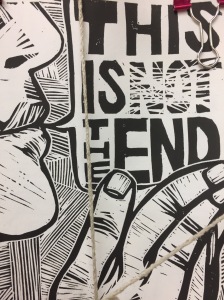 It’s Hillary behind COVID. That reject.

And Bill Gates – here he swallows, the saliva

pools. And I think about how far spite,

They engineered the virus with China,

To keep Trump from re-election.

Otherwise (his finger to the camera)

You tell me! How could this happen?

with the Golden Rule, maybe. Or to not bear false witness.

I’d remind him that the death that struck the Byzantines

Or maybe this so-called Christian would speak less,

knowing Martin Luther in his preaching

during the days of Black Death.

You’re Sheeple, he interrupts, his history

How can you talk to someone for whom there is no time but now?

No victims but us? It may be a novel virus,

but it’s not novel. The Spanish flu didn’t need Obama to do

what it did back then. Each time, it seems, we try witches, name

evil eyes, put the homes of Gypsies and Jews to flame,

afraid of one virus only to be infected by the other;

the real conspiracy, the tragic legacy of those who claim

we’re only safe when someone else is to blame.