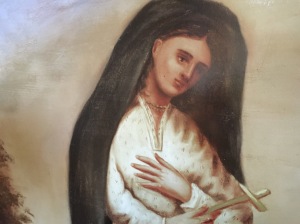 Yesterday, as some of you know, a group of us went to Kahnawake. We’ve been told by our last National Convention and also by our Bishops that we Lutherans should get to know our First Peoples neighbours. For us, that’s the Mohawks. So the Montreal Lutheran Council and Dean Jim Slack planned a morning of visits. Yesterday, off we went, across the Mercier Bridge.

Part of our visit was to go see the shrine of St-Kateri. Kateri was – IS, I should say – the first ever Indigenous woman sainted by Rome. A local saint. A lot of the Mohawk don’t go to church anymore and don’t necessarily care that much about it. But there was a member of the parish of St Francois Xavier church who gave us a very nice historical intro to Saint Kateri . Our guide proudly showed us the marble Kateri shrine containing the remains of the Saint. He showed us the painting of Kateri, who it is said, suffered from terrible smallpox scars on her face up to just moments before her death, when her skin miraculously cleared up and was made clean.

Our guide was a nice man, a very kind man, and a generous man. And clearly he was very interested in Saint Kateri. He was enthusiastic. He’d finished his historical intro and we were going to sing a hymn and say a prayer, when he said: “wait – if you’re interested, I have a special treat for you.”

What could he possibly mean? We wondered. He disappeared and came back with a small woven basket, with something in it. “Since you’re interested in Saint Kateri,” he said, “This may be for you.” There was something white in the basket. “If you’d like to have a special moment of veneration,” he went on, “we have one of the wrist bones of St Kateri. You can pray with the bone of the Saint right here.”

We all smiled. Several people nodded their thanks. Then our guide left. And we Lutherans just sat there, a bit stunned.

As a good Roman Catholic, it was perhaps the most gracious thing our guide could have done. It was incredibly generous. In one way, it was very thoughtful. But did our guide miss the memo? Did he not know that the group who were visiting the shrine yesterday was a group of Protestants? Not just that, but Lutherans? And visiting on, of all days, Reformation Day, the very day commemorating Luther, who railed against relics?

Then I saw a new heaven and a new earth, says the book of Revelation, for the first heaven and the first earth had passed away, and the sea was no more. And I saw the holy city, the new Jerusalem, coming down out of heaven from God, prepared as a bride adorned for her husband. And I heard a loud voice from the throne saying, ‘see, the home of God is among mortals…and then the clincher: God himself will be with them.’

There’s something special when you can remember with ALL your senses. I don’t know about you, but when I smell certain smells – maybe a birch forest, or the smell of fresh bread, or the smell of grass right after a rain – memories just come flooding in. Touch is the same. I have a beautiful Bavarian sweater given to me by some friends in Germany. Every time I put it on and feel that rough wool, the memory of my visit with them comes back to me as if it were yesterday.

So I guess that’s what a saint’s bones might do for a person. That is, the right kind of person, in a tradition receptive to it. Which is not, to be honest, my tradition. I suppose that bones can be a symbol of what the prophet hears in Revelation, when he hears the comforting words God will be with the children of creation, not in idea only, but right there. Not having grown up with any kind of feeling for relics, I must admit that mostly, I found the sight of a wrist bone a bit off-putting. It was, for me, bizarre. I’d prefer to remember Kateri in my mind than to look at her actual enamel and marrow.

But does my discomfort mean there’s nothing to learn, or to be blessed by, in that situation? I don’t think so. Sometime we who are Protestants are too quick to dimiss the physical nature of memory, and the physicalness of the Creator’s love toward us.

On this mountain the Lord of Hosts will make for all peoples a feast, says Isaiah. And it won’t be a feast of ideas, but of real, solid things we know and treasure – the kinds of things we can taste and touch and smell: A feasts of rich food, of well-aged wines. It IS true that certain aspects of our faith are far, FAR more than intellectual. It’s true that some blessings need to be received that way: we taste the eucharist, we feel each other’s hands, or cheeks, when we pass the peace, perhaps we wipe tears from our eyes when we hear a hymn or a passage that touches us deeply. For me, and I think for others, one of the most powerful moments of the deconsecration service for Good Shepherd and for the Finnish church home was when we reached out and physically touched the walls with our fingers while thanking God for the shelter those walls had provided. Our Creator sometimes speaks most strongly to us through our senses.

There’s some talk that now-former Prime Minister Stephen Harper – who is, of course, very much alive – will be honoured by naming the Calgary airport after him. If that happens, it will be like Pierre Trudeau airport here in Montreal – a memorial that lasts long after the person is gone. Memory is inevitably connected to what is physical.

All Saints’ Day is a day for us to participate in this MORE-than-just-thinking, but-also-feeling kind of remembering. It’s a day for recognizing the ways in which, by means of much more than bones, those whom God has called saints have left us their witness. Physically. In bricks and mortar AND in bones AND in all kinds of other ways. This is what is sometimes called the “deposit of faith”, or Tradition. The witness of those who have died still lives on in ways that might surprise us. In our bank accounts in our churches, for one thing. In the hymnbooks in our hands. In our gestures. That witness might be in the very DNA we carry from faithful parents and grandparents, aunts and uncles, all the way back to the apostles themselves.

Death will be no more; mourning and crying and pain will be no more, for the first things have passed away. The scriptures want to tell us that this isn’t just the future and it’s not just the past. New life, in love, is what can be beginning, in hope and in the spirit, in our lives, right now. I am the Alpha and the Omega, says God in Revelations. The beginning and the end, the constant source of love and the memorial that can outlast each and every change, even the grave.

I watched what happened at the Kateri shrine after our guide went back to his office for a minute. Some of our little group of Lutherans wandered this way and that in the church. Some looked up at the frescoes. Some prayed quietly where they were for a minute. A few lit candles. Most went straight to the museum and the gift shop. Only a couple went to look at the bone. But nobody seemed all that bothered by it, one way or the other.

The most lasting memorial is love, however it is expressed. It can be expressed by a Roman Catholic guide who offers the best witness he has at his disposal, from his Tradition, to a group of strangers whom he wants to welcome. Love, says the Bible, endures. It is stronger than books AND bones, stronger even than the grave. Death will be no more, says the Lamb on the throne. But love goes on. Behold, I make all things new.

As we remember our loved ones with the sound of a bell and the smell and light of candles, and as we celebrate the faith that made those we remember saints, may these bones we inhabit really live. May the words of the prophet call forth the Spirit from the four winds, into our lives. And may the Almighty and the Ever-Gracious, the Lord of life, someday grant us, in our turn, the best, most real, and most lasting, memorial of life – a love that is remembered, physically remembered and lived out, even in, past and through, the grave that awaits but cannot contain us, God’s saints.