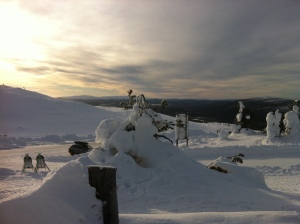 Okay, there are a few differences. At the bottom of the hill at Levi, Lapland (about 120 km north of the Arctic Circle), behind the state-of-the-art chairlift (heated seats, a tinted canopy and a conveyor belt to help you get on), there’s a wooden tee-pee where people crouch in the semi-darkness over a fire and cook their sausages for lunch. There’s one electric-car recharging station in the town, and the rental shop carries the standard glittering equipment you’d get at Lake Louise or Chamonix. But there are also posters advertising reindeer rides and Lapland igloos where you lie on your back and watch the northern lights. (They neglect to mention that there’s been little sunspot activity this year and a corresponding drop in occurrences.) The snack bar has all the usual fries and hot-dogs, but also salmon on rye rusks, reindeer burgers and a kind of potato pancake that they call ‘bread’ here but reminds me of a thicker Norwegian lefse (apologies for using one obscure Scandinavian cultural reference to help try to explain another!) In fact, we’re only a couple of hundred km from that northern reach where Norway and Finland greet each other overtop of Sweden, and sometimes ski accident victims here might be taken to a Norwegian hospital rather than a Finnish.

I help Kaapo and Oiva, my host family’s boys, get into their snowsuits. Kaapo is not feeling well. Their father, Matti, has been shovelling snow off of the family’s cottage roof all day, but the big man seems none the worse for wear despite the back-breaking labour. Sari and Matti take me to the restaurant near where they met, and treat me to a local speciality: a warm, flat Lappish cheese with accompanying cloudberry sorbet, and a thick caramel sauce on the side. I may not be in heaven, but I’m close. On the way out, I pick up the local Levi Times paper: “Kittila became an independent parish by Russian imperial edict on 30 January 1854,” it says. “Population 6500. There are 900 inhabitants in the town of Levi and rooms for 24,000 tourists. Unemployment rate 13%, 718 lakes and reindeer approximately 12,000.” 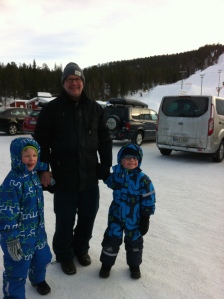 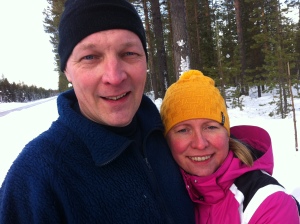