Several times now while walking downtown I’ve walked by a children’s park on the river with colourful images of the game “Angry Birds”. Wow. These Finns are really commercialized, I thought. Until Sari told me: did you know that Angry Birds was invented here in Rovaniemi? The creators donated money and play equipment.

I walk past the lonely little fast-food “grilli” where, my first afternoon, I bought a sausage and stood in the snow in the middle of the empty parking lot to eat it. Then up the pedestrian walk, past the display of reindeer antler jewelry, imitation Sami shoes with their upturned toes, and ice sculptures. I wander into one of the local “Safari in the Arctic” waiting areas. There are two friendly young women at the reception who tell me they don’t mind if I use the wi-fi. As I work, a United Nations of tour groups pass through. They are back from snowmobile and snowshoe journeys, and are returning their helmets, gloves, and full-body suits. There is a long wall of packed snow blocks that the city has required the companies to erect to muffle the sound of so many snowmobiles taking off. I hear Chinese, Hebrew, French, Russian and English, and some languages I can’t identify.

The fluidity with which Finns switch genders in their speech is often funny, and sometimes disconcerting. Because there aren’t different words for “he” and “she” in Finnish, when speaking English to me, the Finns here may just choose one at random: “Oh yes, my husband is a tall man and she is strong too.”

I’ve also learned that there are many different words for “bear”. The reason, apparently, is that in the “old religion” you were never supposed to say that word. They came up with synonyms and other ways of describing the powerful creature, which not so many years ago had the status of a god. I think about the Bible, and the way that Yahweh’s name was never to be spoken aloud.

My host for the last day in Rovaniemi is Ilari K. He is a pastor in the church that is hosting my second set of documentary showings. Although he looks to be barely out of his twenties, he tells me that many years ago he and his wife and first two children (they now have five) spent a year in Saskatoon. Immediately we start comparing memories. He takes me to the university where I meet the chaplain, Heini, and tour the building. We three have lunch together. After, when I ask him to drop me at a wi-fi spot, Ilari simply takes me to the family home.

I walk in to meet a very young-looking woman whom I assume to be Ilari’s wife Kaija. I give her the flowers I bought at the supermarket while Ilari picked up groceries. “This is my daughter,” Ilari says as I hold out the flowers. Then, just when, stammering, I start pulling them back, he corrects himself: “I mean wife.”

English is so difficult. Either that, or it’s that Finnish sense of humour again. 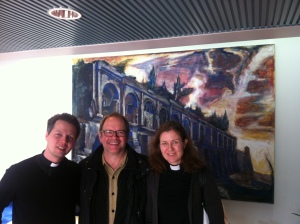