A really good interviewer gets you to forget everything except the conversation. You get so comfortable you just say how you feel. As a documentary maker I’m usually on the asking side of the microphone, so during my radio interview I was surprised to fall into that forgetfulness.

Salla was my translator. She’s a student I will always be grateful introduced herself to me when I was still bumbling through my first evening in northern Finland. She’s personable, intense and intelligent, and speaks English almost like a native. She volunteered (or was coerced?) to do the simultaneous translation for my interview with Ulla M. Despite their difference in age, as soon as I walked into the studio I could feel the warmth between the two women.

Ulla, the driving force and talent behind Radio Dei, has the perfect FM radio voice: a deep alto, unrushed, with always the hint of a smile. She also has a quiet charisma that may come from her performances of poetry and song with her husband, the music director of the parish (for her singing, think Ute Lemper or even Marlene Dietrich, minus the scandalous German lyrics). She sat me down on the other side of the desk, put a microphone in front of me, looked me straight in the eyes and I was quite lost. If I were a criminal I would have confessed.

Fortunately, the questions – at least at first – were rather easier.

Why are you here in Rovaniemi? Partly by accident. I looked at the farthest point north on the map that seemed to have an airport. Where I might have contacts. Sari Kuirinlahti has been a wonderful host. For people who think of themselves as unfriendly, the Finns have been very welcoming.

Why are you interested in Finns? I wasn’t. But every year more I work with them, I find the country, its people, its emigrants – and its music, more fascinating. And I think the sauna is a great invention.

Just when I thought I was safe, the zinger: So, you asked all these people where was home? You seem to travel quite a bit. What’s YOUR answer to that question?

Finally, when the mic was turned off, I was afraid I’d said too much. Then again, I wish I’d said more: about the soppa, or warm blueberry soup, that Ilari made me, his smock over his clerical shirt. About skiing around the pond looking at the devotional signs that Sari and Matti designed and put up, and how I got cocky thinking about Canadians on cross country skis and almost wound up flat on my back. About meeting Milla in Helsinki, the director of the press unit for the Finnish Lutheran church, and sharing an evening of laughter and conversation over some kind of Russian pancakes with caviar I’ll probably never taste again. About the strangeness of an altar fresco that shows wolves tearing apart a reindeer and the familiarity of wood curved so smooth by handwork you feel you are touching the essence of the tree. About Pekka Simojoki’s music and Levi’s snow and reindeer soup as a staple, about Lestarian faith and not ever getting proper wifi. About being Canadian at the Arctic Circle of a land I have never known.

So much more I could have said. How can one ever sum up even a week’s life in a few short minutes? One thing I made sure to say: even when we think our lives are small and unimportant, we should know that they are grand, and every one full of drama and hope and fear and promise.

“I’m afraid the interview won’t be any good,” Salla blurted out when we said our goodbyes. “You’ll be able to hear us smiling all the way through!” What a wonderful experience this Suomi-conference sponsored trip was. My one and only task was to experience Finnish culture. I feel I barely got started. 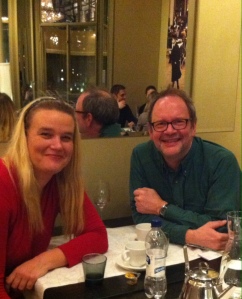