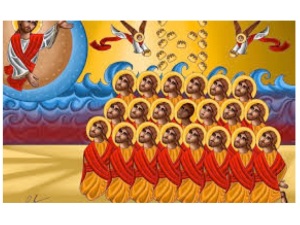 So now we can’t ignore it anymore. We saw 21 men, twenty of them Egyptian Coptic Christians, and one believer from the beautiful happy, singing church of Ghana, paraded down a beach in Libya in orange jumpsuits. Holding them were black-suited, hooded members of the group ISIS. The hands of the twenty-one were tied behind their backs. They were made to kneel in the sand. Then they were beheaded. For only one reason. Because they were Christian.

I expect that all over the world, Christians are waking up to a new meaning to Jesus’ words. If any want to become my followers, let them deny themselves, take up their crosses, and follow me. It’s a new meaning which is actually just the old meaning, remembered. Martyrdom for faith in Jesus never went away. But here in Canada and in the West, because it tends to happen in far away places (and often to people of another skin colour), to our shame we’ve been ignoring those OTHER Christians fairly successfully. Until now. ISIS is so intent on spreading terror, and so good at social media, that increasingly we can’t escape what bloody Christian martyrdom looks like.

Oddly enough, despite the horror and loss to those twenty-one families, ISIS may be doing the western Church a favour. We’ve forgotten our roots. We’ve spiritualized, abstracted, and made metaphors of Jesus’ words in the Gospels about martyrdom. We’ve reinterpreted them and tried to find their inner meaning, not necessarily for bad reasons, but because these aren’t situations WE face. We’ve hemmed and hawed and turned this way and that and managed to escape the blunt awfulness of the thing: If any want to become my followers, let them take up their crosses….

The twenty-one who were murdered were not rich. They were poor, from poor families and poor villages south of Cairo. Otherwise they wouldn’t have been working in such a dangerous place. Even though some of those men had university degrees, they had left Egypt to do manual labour to try to support their families back home. They did not live saintly lives, but that does not mean they are not saints. Especially now. They join the many, many Christians who have already lost their lives in Iraq and Syria, and elsewhere. Now Libya.

Then Jesus began to teach them that the Son of Man must undergo great suffering, and be rejected, and be killed.

Apparently, after the initial shock of seeing the executions, the feeling in one village where so many of the men came from, gradually turned from grief into a kind of grim joy. “At least if they were going to die,” said one mother, “we wanted them to die for their faith. They have done that, and now they have joined the martyrs.”

Joined the martyrs. Do we have any idea here in the West what that means? I don’t. It seems to me that only by listening to the experience of these other Christians – being forced, in a way, to listen to what they have been living, that we here can re-learn some basic truths. We do not share their experience. Of course that’s a relief. But in our western blessed peace we have forgotten how to notice, to listen, and to pray, in solidarity with those who suffer for the sake of the Son of Man.

In the Psalm it says: for God did not despise or abhor the affliction of the afflicted. God’s face was not hidden…God heard. So must we hear, and not ignore. The God we say we believe in is no stranger to suffering, or compassion, and calls us to be the same. NOT to flee into mindless comfort ignoring the other, harder realities in this world.

A Coptic Christian artist living in the United States, Tony Rezk, created an icon showing the twenty one. Maybe you’ve seen it. It’s a bit like a classic Orthodox or Coptic icon, but different. The twenty one are kneeling, their hands behind their backs, as they were when beheaded. In front of them is Jesus, lifting his hands to show them the crowns that they’re about to receive.

The high-profile executions on the beach have done what few other events could do: they’ve galvanized some kind of solidarity. They’ve brought together Coptic and Roman and Protestant Christians, black and white and brown, from all over the world. When he was asked about the faith of those twenty-one, the artist said: “historically, the Coptics have give three gifts to the wider church: theology, monasticism, and, again, it seems, martyrdom.”

I don’t know if you’ve noticed, but for some months we’ve been quietly praying for our Christian brothers and sisters in Iraq and in Syria. Syria, in particular, was, after Jerusalem, the first Christian community in the world. In the New Testament, it says that Paul and Peter met and argued in Antioch, and that the first missions west went out from what is now Syria. There are ancient churches and monasteries there – the MOST ancient – that are being destroyed even as we speak. Our elders in the faith.

What we cannot do, and must not do, is pretend that we share their experience. We don’t.

Any kind of hysterical reaction to the martyrdoms is not helpful. It is not WE who are being persecuted, it’s our brothers and sisters in those lands in bloody contact with radical Islam or with others who hate what Christians represent. The temptation in the West has always been to make everything about US. “Oh what a frightening world we live in. We should react angrily against the Muslims who are our neighbors here. We should protect ourselves even more. We should become paranoid and give more power to politicians and to businesses.”

The fact is – we’re actually incredibly safe from terrorism. Yes we had the two murders here in Canada last fall. They were tragedies. No doubt. But they were only two. Scott Gilmore, a columnist in Maclean’s magazine, said the same when he wrote, last issue, about getting perspective. Terrorism is not a real danger to Canadians, in Canada. Statistically, we are far more likely to die from hitting a moose. Apparently, when some Italians heard the terrorist threats on social media to over-run Rome, they laughed and offered advice on rush hour traffic.

The point is, it’s not about US. God has not called US to be martyrs. Not now, anyway. Maybe we wouldn’t be capable. I don’t know. But what we CAN do – perhaps what WE will be judged on – is whether we now, knowing about these martyrdoms, live in solidarity with these martyrs. Can we be with them, in prayer and in compassion and in other real concrete ways such as support for CLWR, for refugees and for immigration? Our brothers and sisters are dying. We must remember, and pray, and do what we can.

The church has never been just here, just us. There’s a beautiful evening hymn that has the words: “as to each continent and island, The dawn leads on another day, The voice of prayer is never silent, Nor dies the strain of praise away.” We are not Coptic Christians, or Egyptians, or Syrians, but we are tied together with them forever, in the Body of Christ. And if we forget them, we have forgotten ourselves. For those who want to save their life will lose it, says Jesus, and those who lose their life for my sake, and for the sake of the Gospel, will save it. And then words that could be aimed straight at us: for what will it profit you to gain the whole world, but lose your life?

The blood of the martyrs cries out from under the altar of God, and we must not close our ears to it. It is crying out – not for fear, and not for revenge – but for prayer and love, for solidarity with those who still have to go on in those difficult places. There are twenty one new martyrs. May God help them, and help us to remember them.