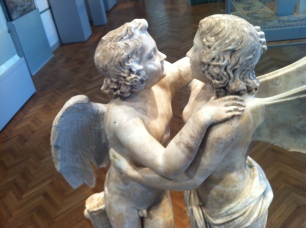 “Over 40 dead after migrant boat sinks off Turkey” Huffington Post.

“Thousands of complaints about the behaviour of physicians lead to very few cases of discipline” CBC News.

If I speak in the tongues of mortals and of angels, but do not have love, I am a noisy gong or a clanging cymbal.

“Genetic law urgently needed to keep insurance and other companies from discriminating against those with previously hidden flaws, says watchdog” Yahoo Canada News.

And if I have prophetic powers, and understand all mysteries and all knowledge, and if I have all faith, so as to remove mountains, but do not have love, I am nothing.

“Man in Oshawa Ontario legally changes his name to ‘None of the Above’ so that voters can choose ‘none of the above’ in the Ontario provincial byelection soon to be held there.” CBC News.

If I give away all my possessions, and if I hand over my very body so that I may boast, but do not have love, I gain nothing.

“Love is patient, love is kind…” We really know those words. They’re some of the most famous from the Bible. Thanks to weddings, even people who never go inside a church know these words: “Love bears all things, hopes all things…” However, they don’t much sound like words from the news. “Love is not envious, or jealous or boastful…”

Love, love, love, love, love. Saying it is all very pretty, but when you get right down to it, what does love mean? This is a bit of a problem when it comes to actually applying what Paul has so beautifully expressed.

He wrote: “Earnestly desire the higher gifts”. And we should answer: of course! The problem is, love isn’t something any of us actually disagrees with. I mean, EVERYBODY thinks love is good. If we hired a survey company to phone a thousand people and ask them about this, 990 would all say the same thing – that yes, love is a very, VERY good thing.

And Jesus too said it: Love one another as I have loved you.

But do we or can we even agree on what this ‘good thing’ actually looks like? How we live it out? Practice it?

There are least two quite different ideas about love. We’ve probably agreed with both at one time or another.

Number one assumption about love is this: we tend to love – and SHOULD love – what we’re used to. As in, only someone like me who grew up in Saskatchewan loves that desolate prairie landscape. Or more seriously: if you were a child who was abused or beaten by your dad, how could you ever come to love a god who sometimes goes by the name “our Father”?

This is what we could call the “natural” ideal of love. We love as we’re able. Love is one of our self-expressions, and as such it is limited by our experiences.

So far so good.

However, there’s ANOTHER idea about love, and it can’t be stressed enough that this second idea about love isn’t the same. In this idea, love doesn’t necessarily come OUT of who we are and what we experience. Rather love goes INTO who we are and what we experience. In other words, if we love in ways that don’t necessarily come naturally, perhaps what is natural for us will change.

Consider again Paul. The guy who wrote: Love is patient and kind.

Paul? Anybody who’s studied the man knows that patient and kind are not the first words you’d ever use about Paul. It doesn’t sound much like the sarcastic apostle who told his opponents in the book of Galatians that if they wanted circumcision so badly they should just go all the way and castrate themselves. Frankly, he could be quite nasty at times. It sounds to me a bit like Paul was hoping someday he might live up to his own words.

But would that be so bad? Maybe, instead of love being what comes naturally, sometimes love has to be what is actually a stretch.  Most of us can be, and often are, basically kind people. But it’s harder to be loving and caring about some Christian we don’t know, who speaks a different language and has a different culture, who is a refugee from Syria. Or, even more, the Muslim refugee from Syria. That’s the kind of love that takes, not just a natural rush of sympathy, but several days or weeks or months’ worth of conscious caring.

Maybe, if we think biblically, we’re cautious of the kind of love Paul describes because we realize, down deep, that to love that way might be the end of us. Literally. Like it was the end of Jesus.

Since we ALL say we believe in love, we’d better know what it is we’re agreeing to. Paul leaves no doubt. Real love, he says, follows Jesus, who was not scared to show it. Real love results in the destruction of the old self and in the creation of a new self.

Love, in other words, is scary.

You and I are called to learn to love as does our Lord. Not as we can. But beyond what we can.

And these three remain: faith, hope, and love. But the greatest of these is love.