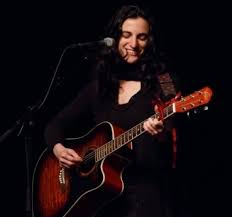 This last week a friend of mine, Orit Shimoni (http://www.oritshimoni.com/), came to town to perform. She’s also sometimes known as Little Birdie. Years ago she did graduate studies at Concordia, which is where I met her. Now, she tours all over the world playing her music. The place she sang at last Wednesday was a café on Cote-St-Luc road (not very far from here). It’s a small venue – fits maybe thirty people. She did the set with just a guitar and nothing else, so the words were really clear. Orit’s got kind of a theological bent to her music, which is one of the reasons I like it. One set of lyrics in particular struck me. It was about Cana, sort of.

There’s a tragedy behind that song. I didn’t ask her, but I think it’s about alcoholism. Orit sings a lot of sad songs, and songs with bite. But this one in particular has a ring. IF I could turn wine into water. Meaning: I can’t. And even though I don’t know the details, and I don’t know if it’s even about Orit: whoever that song is about couldn’t make a miracle. That’s what the song is about. That person couldn’t stop the alcoholism. Couldn’t turn wine into water.  And so now, instead of singing about a happy future, the song is about regret.

Makes for a great song. But a sad memory.

In the Bible story, the bride and groom, in fact, the whole wedding party, are headed for a disaster. Not an earthquake, ice-storm, tsanami kind of disaster. But the small kind of disaster we all run into every day and all hate: a major glitch. A screw-up: the wedding reception was about to run out of wine.

Now. This is not the worst thing that could ever happen. But if you’re the bride and groom, or the person responsible for the reception, it’s bad enough. No wine means unhappy guests. Probably guests leaving. So it says that Jesus’ mother stands up from where she’s seated, and makes her way over to see him.

The writer makes it clear that Jesus and his disciples were at the wedding in Cana, NOT to face any tests, but just to enjoy themselves. It’s not even clear if Jesus knew the wedding couple. I imagine in the hills of Galilee, it might have been a bit like some Italian weddings I’ve been to, where the whole neighbourhood is invited.

In any case, when we meet him Jesus is off in a corner, well-hidden. He’s out of the spotlight and wanting to keep it that way. But then the wedding runs out of wine.

Mary’s clearly a mother who knows her own kid better than he seems to know himself. She comes to his table and announces: “they have no more wine.” As if the next step is obvious. “They have no more wine – now, do you want to leave your own mother without a glass of Chardonnay?” Quite naturally, Jesus responds: “what does that have to do with me?” I love that. This is NOT the pious, angel-faced, head-upturned or downturned Virgin Mary we see in statues so often with her hands clasped meekly at her side. This is a tough Jewish mother who knows what her son is capable of, and won’t take no for an answer.

You would think that the Lord speaking should be enough for any human being. But no. Mary ignores Jesus completely. The Son of God, the Lord of Life, and what does she do? She goes back to her own table. And tells the servants: “do whatever he tells you.” She KNOWS he’s going to fall in line! The fact that the Bible treats a lack of wine as a disaster is already interesting. But that’s NOT the main point. The main point, at least in my thinking, has to do with the water.

You can imagine Jesus sighing and shaking his head. Once a kid, always a kid, even Jesus. Do you see those stone jars over there, he tells the servants? Fill them to the brim with water. Then, he says, go, take a jug, and fill it up from those same stone jars, and take it to the chief steward.

And so, timidly, one of them does.

This is where you and I come in. You and I are that one scared servant. Like the woman my friend Orit was singing about, you and I don’t have the power to do miracles. If we could, we would.

All we can do is carry the miracle. Every time we get together, every time we pray, and especially every time we go OUT in Jesus’ name and try to do something for the world, we’re the poor, terrified, uncertain servants. Just like at Cana, it’s all simple stuff – water, bread, wine. Or maybe in our cases, it’s a hug, or a song, or an ear, or a moment’s time, or a few dollars, or a few words. Now draw it out, Jesus tells us, even though it looks like simple water, and take it to the world.

So. If we’re faithful, if we’re trusting, and more often than that, even if we’re doubting, we do that. We draw the water out of our unremarkable, unmiraculous lives. Because ultimately, THAT’S ALL WE HAVE. Then we go. We carry what we fear might be way too ordinary, to a world that doesn’t expect or believe in miracles, but like the wedding guests need them just the same. And if it turns out that the water is just water, then, like St Paul said, we’re the greatest fools of all.

It took faith for whoever that first nameless servant was, to take a jug of what he or she was pretty sure was worthless, and take it to the head steward of the whole feast. And it takes faith for you and I to do OUR simple commissions, with our simple lack of resources and abilities. But we have to. That’s what we’re supposed to do. That is how we will be judged.

And just in case you and I think we have nothing to offer, we should think of the news story from CBC this last week. Did you hear about it, or read about it? There was a fourteen year old kid who was begging on the street, saying he was homeless, and in the midst of that terrible cold of this past week, although a few folks gave some change, guess who was the ONLY person to stop and offer this kid a coat – in fact, the coat off of his own back? The only person to help was another street person, an Inuk man, Putulik Kumaq, originally from Nunavut, but homeless on Montreal streets for the past 17 years. It turned out that the 14 year old kid was doing a school project and was being filmed secretly by his brother, which is the only reason we know about this selfless act.

Anytime we say we have nothing to give, we can remember the servants, who were just asked to carry water, and we can remember Putulik, who said “it’s cold, and I had a feeling he needed help”.

On the third day, it says, there was a wedding in Cana in Galilee, and here, amid the food, and drink, the visiting and gossiping and the stuff of life, Jesus did the first of his signs.

Wine from water is just the beginning. That is the real point. In your life and mine, wine from water is nothing, compared to what our Creator can do. You are carrying miracles, if only you know it, says the Creator of singers who come to Montreal, of street people and poets, of Putulik and Paul, and of you and me.